This blog post is about a Lean concept that I have wanted to share with you for awhile. It concerns the idea of error proofing or mistake proofing (poka-yoke).

There is another similar term, baka-yoke, which translates as "fool proofing."

Toyota prefers the former term because it is less derogatory and more respectful of the worker. It shows a systems mindset. It reflects Lean’s focus on “how” and “why” an error or defect occurred rather than “who is to blame.”

When I first graduated vet school in 1980, I purchased a personal computer (anyone remember Radio Shack’s TRS-80?) and started to learn programming. I was interested in writing small programs that would make my work easier. Eventually, I wrote a management program for my practice.

As part of the programming, it was necessary to identify proper data input by the user, so that the software would run as designed and not “crash.” If input errors were found, the user would be notified of the problem and asked to re-enter in the proper format.

For example, if the user was asked to enter a telephone number using the format (###) ###-####, I would have to write a section of code to check for proper input.

A similar set of programming code was required each and every time input was requested from the user-- very time consuming and added tremendously to the length of the program. But, GIGO (Garbage In, Garbage Out), and nobody wants that!

We can see this same idea in use all around us-- from simple warning signs to designs that make errors difficult or impossible. A three-pronged plug can only be plugged into a wall socket one way.

In general, there are five levels of error proofing, as explained by Mark Graban when he teaches Lean. 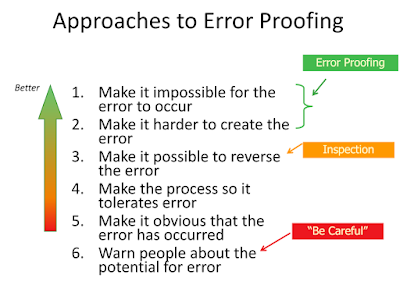 As the graphic indicates, simply posting a sign admonishing workers to “Be careful” is the least effective. Making it impossible to make an error in the first place is the most effective means. 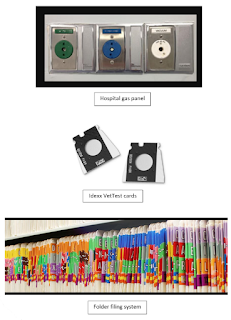 In the above pictures, the hospital gas panel has two ways of error proofing. First, the different hookups are color coded as a visual measure to indicate which gas hose goes to which port. Secondly, the pins of the hookup will only connect and lock with the appropriate gas port.

Idexx has error proofed their VetTest blood test slides by designing them with strategically placed notches on the edges. With this design, the slides can only be placed in the analyzer in the proper orientation.

The file folder color coded end tabs do not prevent misfiled folders, but it illustrates the error proofing concept of making the error easier to detect. 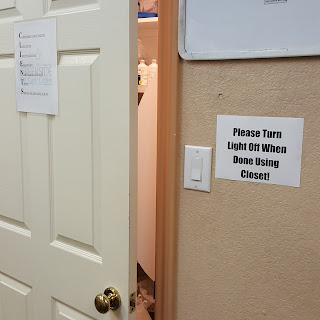 This is an illustration of just how ineffective warning signs are. If management really wanted to control the light in the closet, maybe a motion sensing light fixture would be a better option. The light would come on when someone walked in, but would then automatically turn off shortly after the individual left.

This next photo is something that a client of Mark Graban's shared with him years ago. Mark's not sure of the origins, but the tracks in the snow show how easy it was for somebody to just drive around the gate in the road. This wasn't error proofed (and maybe the gate was broken or not needed anyway). 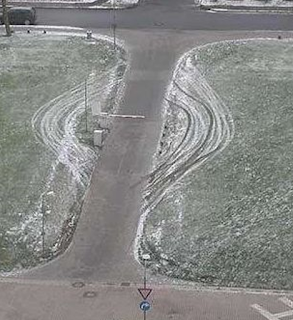 Thanks for participating in this blog. Please follow us and tell your friends about this site.

Heads up! I will be the guest presenter on a webinar series hosted by Mark Graban and KaiNexus on May 7th at 12:00 noon Central time. We will be discussing the new emergence of Lean management in veterinary medicine.  Use this link. Hope you will join us!